Washington’s Lottery suffered an awareness challenge; few citizens were aware that a portion of Lottery dollars paid into public education funding, as was the intent when the Lottery was created in 1982.  With the best of intentions, the Lottery’s 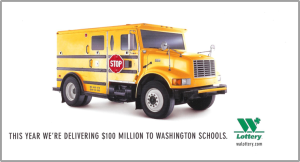 advertising agency created a clever billboard campaign which stated the Lottery’s $100 million contribution to public schools that year.  This enraged many public education funding advocates, who felt the campaign, while factually accurate, lacked context because most citizens may not realize $100 million is a tiny fraction of the total needed to adequately fund public schools.  The education stakeholders were hostile, to say the least, and the campaign ended.  But the Lottery and education stakeholders were still left with the same problem; how to tell the story so the public understood the big picture.

Working with Lottery Director Chris Liu and Marketing Director Michael Cousins, Jacque Coe developed and executed a sensitive outreach plan to engage angry education stakeholders with the Lottery in an active conversation about a Lottery education message that could work for everyone.  If education stakeholders didn’t like the Lottery message, then let’s talk about what the message should be.  Stakeholders recognized the Lottery’s need to tell the public where Lottery dollars go.  The Lottery recognized the stakeholder challenges of helping the public understand the complex realities of K-12 education finance.  Jacque organized a series of collaborative work sessions to develop marketing themes and guidelines, guided by a carefully chosen and skilled facilitator, to avoid creating further challenges while telling the story in an accurate and meaningful way.

The outcome was a strategy to turn the message on its’ head; a series of information flyers mailed directly to the public, which spoke to the heart of the misperceptions, gave the facts, and 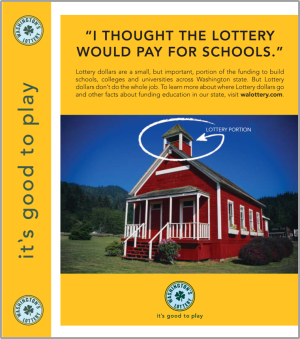 helped educators tell the public the true picture of funding public education.   But the larger outcome was more powerful; new relationships were created, which was the start of a climate of trust to benefit both the Lottery and education.  A group of powerful and previously hostile stakeholders were moved to a neutral position, and now open to a partnership with the Lottery to help educate the public about the facts surrounding public school finance.  A process of strategic community engagement which resulted in individuals working together in the best interest of the public.

“When a powerful group of stakeholders became hostile about the Lottery’s marketing message regarding education contributions, an outreach campaign led by Jacque was successful in neutralizing the negative direction of those stakeholders, who have now become supportive of the Lottery’s efforts to communicate accurately and effectively. Further, she used the opportunity to launch a statewide campaign about where Lottery dollars go, which has been extremely well-received and crucial to the work of the Director and Legislative Liaison in improving and building relationships with state lawmakers.“